George Clooney Joins OMEGA for an Exclusive Event at a Secret 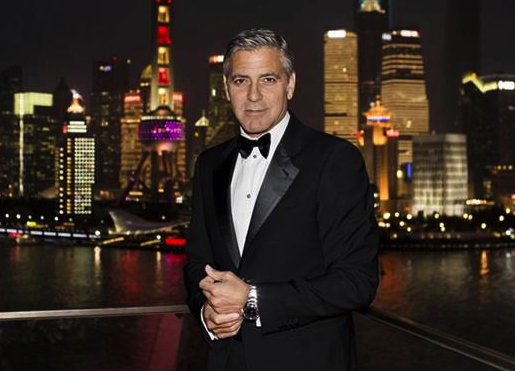 George Clooney Joins OMEGA for an Exclusive Event at a Secret

OMEGA and long-time brand ambassador George Clooney met in Shanghai for an evening of celebration. The award-winning actor and producer was part of a star-studded event on May 16 where OMEGA showcased its new Seamaster Aqua Terra timepieces. In addition to George Clooney, OMEGA President Stephen Urquhart and Orbis International CEO Jenny Hourihan also addressed the invited guests while French songstress France Owlle entertained them at the end of the evening.

Le Jardin Secret
“Le Jardin Secret” – or the secret garden – was set up in Shanghai specifically for Friday’s event, providing the perfect atmosphere for the exclusive celebration. An innovative, transparent roof on the venue allowed guests a clear view of the celestial stars in the night sky. The garden featured design elements that were created around the parallel lines that distinguish the watch dials of the Seamaster Aqua Terra watches.

An evening of surprises
George Clooney, who has been an OMEGA brand ambassador since 2007, is one of the film industry’s most acclaimed talents, having been nominated for Academy Awards in six categories – more than any other person. He was warmly welcomed to the stage by the audience and spoke about how his relationship with OMEGA began.

“My father wore an OMEGA watch for many years. When I began working with the brand, I called my father to tell him the great news. He told me his OMEGA was in the attic and after finding it, he wound it up and it still worked. I gave it to OMEGA and they were nice enough to fix it up for me and I was able to give it to him for his birthday. I have a long, long history with the brand,” he said.

Shortly after a welcome speech by Stephen Urquhart, the lights dimmed and a short but powerful film was screened, focusing on the remarkable work done around the world by Orbis International, an organization supported by OMEGA which is committed, with its Flying Eye Hospital, to delivering high-quality eye care to some of the world’s most remote regions.

Following the screening, Orbis’s CEO, Jenny Hourihan, discussed the work her team has done since the organization was founded in 1982.

“I think all of us as human beings have a great desire to do good for our fellow men and women. We at Orbis have a very clear and tangible mission that is very understandable and that is to restore sight and eliminate blindness in the world,“ she said. “Thank you very much, thank you again OMEGA and thank you for taking time to learn about Orbis.”

Following the speech by Jenny Hourihan, George spoke about the importance of an organization like Orbis International saying: “We are all a part of a community and we have to take care of each other along the way. What Jenny does at Orbis is amazing and OMEGA, the giant company that it is, has decided to take this on and help. I can’t tell you how proud I am to be associated with the brand.”

Later in the evening, Dr. Hairong Cai, an ophthalmologist who works for ORBIS, talked about some of the medical treatments the organization had provided to two Chinese children. To the delight of the audience, the youngsters were escorted to the stage by George Clooney.

After granting her wish and dancing with the younger of the two girls, George Clooney removed the OMEGA De Ville Hour Vision Annual Calendar he had been wearing and autographed its strap and its presentation box. The watch was placed on display at the event and in the months ahead, it will be presented at six OMEGA Boutiques in China. Later in the year, it will be auctioned and all of the money raised will benefit Orbis and the remarkable work it does.

Offering brief, heartfelt remarks about his brand’s friendship with George Clooney, OMEGA President Stephen Urquhart said: “We are incredibly proud to be associated with someone like George Clooney. He’s not here tonight just because he’s part of the OMEGA team, but also because he truly has OMEGA in his heart.”

The evening concluded with a performance by popular French singer France Owlle. 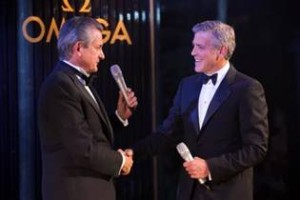 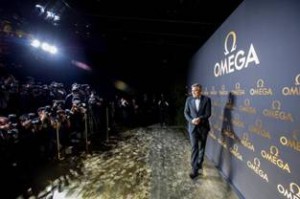 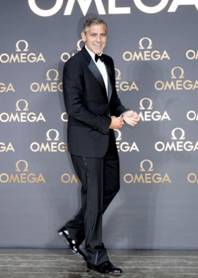 Share This:
Tags:  George Clooney, OMEGA
BELLAMY YOUNG LOOKS AMAZING IN DRESS BY GEMY MAALOUF
May 15, 2014
4 Ways to Grow Out Your Bangs Without Hating Your Hair
May 17, 2014